TM K.K.’s word of the evening “Happiness” was inspired by the today’s Japanese session. He also mentioned that his happiness is to serve as president of Tokyo’s International Toastmasters Club.

It is TM M.T.’s last speech to complete his Innovative Planning pathways project. At the start of his speech, he reflected on his growth and also spoke about the feedback he received in the past. Thus, today’s speech is about feedback. In his first slide, he explained the changes in employment in Japan. From lifetime employment, it has now changed to job changing when necessary. Then he proceeded to briefly introduce the pros and cons of each work style and questioning why Toastmasters can achieve both methods while being clear and also flexible. He mentioned it is because everyone has the same objective and also because of the positive feedback.
To achieve happiness in life, psychologically we need individual space to be alone, mental space to share stress, emotions such as friends and social space which is a space where we feel valuable for others. For example, such as organizations and companies.
He believes feedback makes organization stronger because good feedback makes us feel recognition in each other. Thus, creating a social space to achieve happiness in life. In Toastmasters, because of this feedback system, this makes Toastmasters a stronger organization.

Evaluation for the speech#1: TM H.A.
TM H.A. gave three comments and one suggestion for TM T.M.’s speech. First good point was the effective usage of the presentation slide used by TM T.M. to explain his past and shift in Japanese society. Second good point, was that TM T.M. successfully caught the audience’s attention with the questions in the presentation. Thirdly, he mentioned that TM T.M.’s message that feedback makes organization stronger is very clear throughout his presentation. His suggestion to TM T.M. was to speak with more vocal variety and to include more personal experiences.

General evaluation: TM K.N.
TM K.N. proposed some techniques to today’s evaluators. The first one is to convey the good point by explaining why do you think it is a good point. The second technique is using one’s own idea to improve the speaker’s speech. He also proposed the idea below for effective time management.
2 minutes: Explain the good points
2 minute 30 seconds: Explain the improvement
3 minutes: Closing

GRAHCO’s report: TM S.J.
There were no unnecessary or filler words from the prepared speech speakers. Both speakers also used the word of the day “Happiness” in their speech.

Business Session
TM T.R invited speakers for the next meeting on June 23rd.
Today’s guest, Miss Shimizu also gave her comment. She was happy to be reunited with TM H.N. and TM K.N. in this meeting. 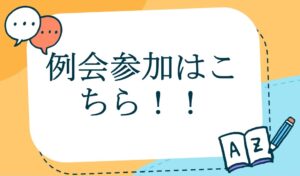